At a recent meeting of the Houlton Rotary Club, Mike Carpenter told the Rotarians about the “Carriages of Acadia”.  Mike and his daughter, Emily, operate the horse-drawn carriage tours of Acadia National Park’s carriage roads.

Mike is a living example of “I have a dream.”  His dad was a blacksmith, so he grew up with horses.  In 1989, he went to Acadia and saw the stables and from then on, went every year.  In 2007, Mike saw an ad looking for someone to run the operation starting in 2008.  On October 2, he got the contract for the next 10 years.  In 2009, Emily graduated from UMO and joined him in the running of the business.

In 2010, they carried nearly 20,000 people over the 50 miles of beautiful carriage roads that wind through the hills and vistas of Acadia.  The tours have become very popular with people near and far.  For five months a year, Mike’s  weekends are filled with playing with his horses and making money in a majestic place working with his daughter….his dream is fulfilled. 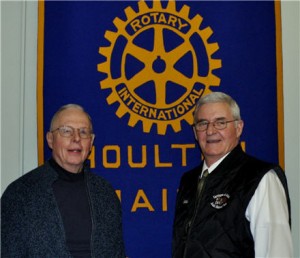