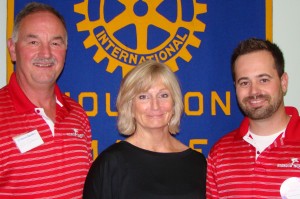 Here in this photo are Bill Getman, director of Big Rock Ski Area, Houlton Rotary President Jane Torres and Jeff Clockidile of the Big Rock Ski Area rental program. Bill addressed the September 14, 2015 Houlton Rotary Club meeting with news of what is going on at Big Rock. Sharing a bit of history Bill referred to the transition from Maine Winter Sports to a community run ski area.  In the year 2000 Maine Winter Sports purchased the property from the Pearce family and ran it until 2013 when the Libra Foundation who controlled the program released the ski area and officially closed it. Maine Winter Sports had done many upgrades to the ski area with new chair lifts, building improvements, parking lot improvements, a new rental shop. They took a quarter million dollar loss. During the fall of 2013 a fund raising effort raised two hundred and fifty thousand dollars to keep Big Rock running with a free lease in place. Bill became the manager in 2012 taking over from Travis Kearney. The first year saw a fifty thousand dollar loss and the second year saw a twelve thousand dollar loss so steps have been taken to improve funding and lift prices increased as well as season passes. Bill has implemented fund raising events for the summer and fall seasons to help pay for a much needed groomer that was purchased this past year. The Top Mountain Challenge brought two hundred entries at sixty dollars each on August 15, 2015. Bill expects five hundred entries next summer.  And the area residents should look forward to Aroostook Brew Fest on October 17, 2015 at the mountain where fifteen brewers will offer forty-five taps from noon to five o’clock. Sponsorships are also available to fund the five dollar ski nights at a cost of one thousand dollars to the sponsor. Advertisement is available on chair lifts and chair towers. The ski area serves forty local schools and 2000 students. The Maine High School State Meet takes place each year at Big Rock drawing bus loads of competitors from around the state. On mountains ski schools and other programs such as races are very successful. For a life long sport during our long northern Maine winters, Big Rock is the place to support.