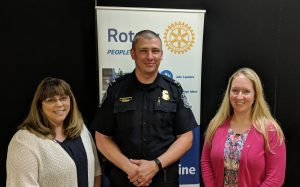 In this photo are Vice President of the Houlton Rotary Club Tracy Rockwell, Christopher Doughty of the Houlton Border port of entry and Rotarian Katie Hill who hosted Doughty. Doughty shared the history of his agency in the United States and how his career developed. He is a native of Fort Fairfield, Maine and a graduate of the University of Presque Isle. CBP stands in for the name of the United States Customs and Border Protection. He came to work in Houlton after being a border patrol agent in Arizona and was hired as assistant director. Now he manages the operation that includes Monticello and Forrest City crossings.

This entry was posted in Uncategorized. Bookmark the permalink.