York’s of Houlton Celebrated at Rotary

York’s of Houlton Celebrated at Rotary 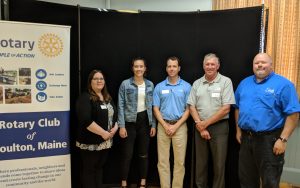 In this photo from York’s of Houlton are Stephanie McGary, Sabra Scott, Jamie York, Dick York and Rotarian Chris Carmichael. Carmichael hosted Jamie, Dick and Stephanie and Sabra was a guest of her mother Rotarian Meg York. Dick opened the slide show with a history of the 50 years of the business since his father purchased it from Ralph Berry when it was on Bangor Street. When Dick and his brother Jerry joined in the seventies to work with their father a new location was sited on Route 1 in Houlton. Jamie joined the business in 2005 and has brought in new ideas. Jamie has not yet found his keys! But he did want to celebrate the employees and along with the slide show asked for Rotarians to guess employee names. Winners of the game were Kyle Taylor, Torrey Sylvester, Lorie Weston and Nancy Ketch.