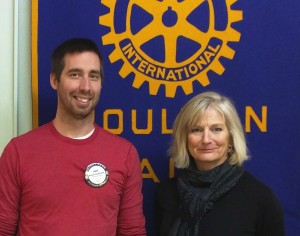 In this photo are Rotarian Nate Bodenstab and President of Rotary Jane Torres. Nate shared his life path to Houlton and his work life with the club on February 1, 2016 at the luncheon meeting. Nate married Rotarian Paul Callnan’s daughter Sharon and they moved to Houlton about a year ago choosing to raise their three boys in Houlton.

Nate earned his undergraduate degree at George Fox University where he did a double major in Computer Science and Mathematics and a minor in Philosophy. Nate went on to earn his Masters and Doctorate in the field of Artificial Intelligence at Oregon Health and Science University. Nate interned with Google in Switzerland. He now works for a company named Nuance in the field of Artificial Intelligence. Nuance develops computer programs that work with voice recognition, self-driving cars, and other self-driving devices. Nate’s specialty is voice recognition and in eight languages going text to speech and vice versa. Nate works with a team of eight people around the world and on the west coast and east coast of the United States. Nuance has clients such as the Australian government, Air France, eTrade, Citibank, Best Buy and others. Nuance created Siri, Swipe, Spotify and Roku and is working on a Smart TV. Nate envisions an incubator space provided for people working in this industry needing a space to work from with excellent connectivity. Nate volunteers at the school teaching computer class and hopes for more education in this area. He helps to reinvent the relationship between people and technology.