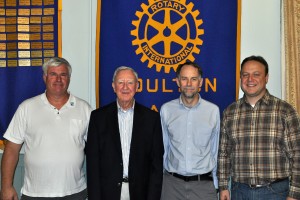 Our guest speaker for 09/17/2012 was Dr. Jack Stokes Ballard Ph.D., seen here with Leigh Cummings and Ryan Bushey. He spoke to us about an Aroostook County Native, but not just any native the only Medal of Honor recipient from Aroostook County. He wrote the book Commander and Builder of Western Forts: The Life and Times of Major General Henry C. Merriam, 1862-1901.

Henry grew up in Houlton, 2 miles up on the North Rd., His parent were Lewis and Mary (Foss) Merriam. He attended Colby College in Waterville but left school in 1862 to join the 20th Maine Volunteer Infantry Regiment, and was elected as a captain. Henry had many skills and character such as he was good with farm tools, expert Horseman, very self disciplined, he enjoyed playing the violin. He was an excellent writer and speaker, many of his letters helped form the book. He found himself commander of African American Troops, which had to be interesting due to growing up in Rural Maine he may not have had much previous contact never mind the fact that he was going from here to New Orleans what a culture change. He embraced each step in his Military Career. He played a role in aspects of the American-Civil War and beyond. For example the Indian War, Spanish American War and the Philippine-American War. The most prominent one being when he earned the Medal of Honor for his actions as a Union officer in commanding his troops at the Battle of Antietam. His official Medal of Honor citation reads: “Volunteered to attack the enemy’s works in advance of orders and, upon permission being given, made a most gallant assault.” He retired November 12, 1901 and settled in Portland Me. Dr. Ballard gave us many more interesting facts about Henry, but I do not want to give too much away, the book can be purchased locally. Dr. Ballard also visited the Cary Library while he was in town.